This is a great diagram from Wikipedia which illustrates the different Star Trek series, how they relate to each-other during “Trek time” and what years the series aired. Star Trek: The Next Generation kicked off an uninterrupted 14-year streak on broadcast television. As TNG was ending in 1994 my love for the show was at a fever pitch!

Favorite Episodes
Before the series finale All Good Things… in 1994, Jonathan Frakes hosted a viewers’ choice marathon special. You can watch some of his episode introductions here. The five episodes chosen were:

This was a thrilling special. While all of these episodes could be seen in re-runs, having them all back-to-back was an amazing afternoon of Star Trek. This was years before VHS and DVD sales would place the episodes in my hands. These five episodes are some of my favorite, but not my personal favorites (I list four episodes, instead of five).

My fourth place winner is A Matter of Honor. This season 2 episode places Commander Riker on a Klingon bird-of-prey as part of a crew-member exchange program. It has some amazing acting from Frakes and is the deepest dive into Klingon culture to date. This was a great revelation in TNG, our former enemies from the original series were now our allies and we could explore their rich and diverse world.

In third place I place The Measure of a Man in the highest regard. Another season 2 pick, this courtroom drama episode places Data’s right to be considered alive on trial. Picard defends him against Riker, in the role of reluctant prosecutor. This episode in a cornerstone showing Picard’s differences from Kirk.

My top two episodes are similar to the cliff hanger duo of The Best of Both Worlds. The Gambit, Parts 1 and 2 are 90 minutes of amazing TNG. I would rather see the The Gambit story  over some of the later Star Trek films. It begins with a mystery: Captain Picard is missing and presumed dead! We are deep into season 7, all of the actors are very comfortable with their characters, and it shows. All of the lead cast have scene-stealing turns where they use their talents to the fullest potential. Data is in command after Riker is kidnapped! Any episode where you place Data in command is a gem in my book. I won’t give the rest of the story away, needless to say I feel this episode is the epitome of Next Gen. 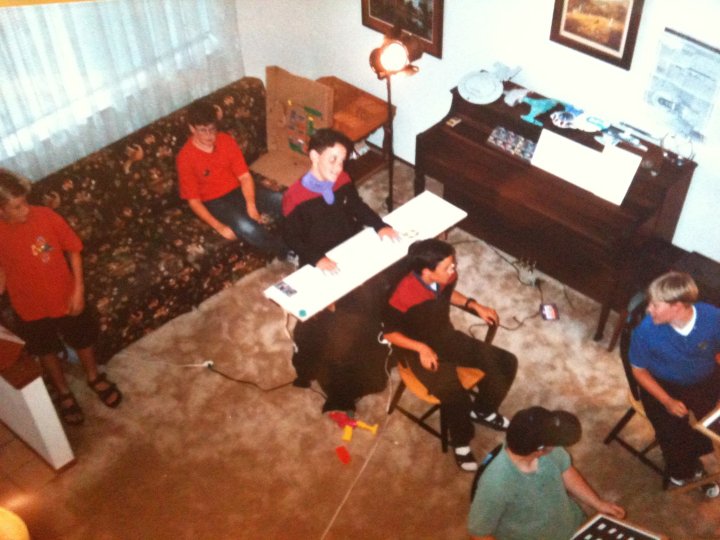 11th Birthday
Back again in the summer of ’94 I celebrated my eleventh birthday, not with a letter from Hogwarts, but a recreation of the Enterprise-D bridge in my parents’ living room. My closest friends were pressed into service and took each position as I navigated a special bridge program I had created. I had filmed elements for the main view-screen (our 11″ TV) and recorded the time code at which the events would appear. By using the VCR clock and a script paper I could call for torpedoes to fire at the space probe and they would actually appear on the screen.

Half of the garage was the shuttle bay with our silver Ford Windstar minivan filling the role of a type-7 shuttle craft. The other half was dressed with orange crepe paper to make the tell-tale grid of the holodeck, complete with “holographic” ping-pong table.

Homemade Films
After my TNG birthday party I filmed my own episode of Star Trek: The Next Generation using my sizable collection of Playmates Toys. I had the bridge play-set, the transporter room, the engineering play-set, the shuttle, the Enterprise-D, a Klingon attack cruiser, and the entire crew. My first Geordie lost his VISOR, and Data is a little worn around the edges, but I am extremely happy to have opened these toys and played with them. I derived more satisfaction from my young Star Trek adventures than I could have from preserving them on a shelf.

Star Trek with my Dad
I would watch Star Trek: The Next Generation every Sunday night at 5 pm PTC. My dad was my faithful viewing companion. While he wasn’t the biggest sci-fi fan, he took these opportunities to sit down and watch the show with me as a bonding experience. We continued this tradition with Deep Space 9 and a little of Voyager. But I will always remember those weekend nights when we watched the screen and talked about the crew of the Enterprise-D.

“Days of Trek“
While recently reembarking on my love of TNG I encountered a coworker who also shared an appreciation for the Enterprise-D. We began to schedule “Days of Trek” where I would select a few episodes to watch and discuss. The fan collectives made this task remarkably easy, assembling a handful of great Star Trek into convenient packages. These days became some of my most cherished times involving Star Trek. For those of you who are attached to any particular work through fandom, you know that when you find a likeminded individual who shares your level of fanatical devotion, the conversations you can have are unparalleled. Our “Days of Trek” talks would delve into the psychological and social aspects of the episodes, analyzing the cultural impact and significance of the work. It was bloody fun! 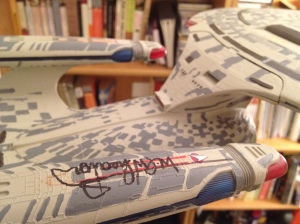 Enterprise-D Model
I was given this model as a gift for my 12th birthday but as much as I loved Star Trek I had yet to develop a taste for models. Fortunately “PastDarren” was smart enough to realize that “FutureDarren” would LOVE a model like this and therefore tucked it away in his parents’ attic. Fast forward to 2009 when I pulled it out and had a blast building it together with some of my friends who enjoyed both models and ships named Enterprise. But Dr. Sci-Fi, how did young Wil Wheaton sign your model if it was only constructed three years ago? I go into the whole story when I talk about My Sci-Fi Man Cave.

The Sci-Fi Cast Episode 008*
I was fortunate enough to skype with Dave and Ged of The Sci-Fi Cast about our combined love of Star Trek: The Next Generation. “Episode 008: Star Trek: The Next Generation’s legacy with guest Dr. Sci-Fi” contains many of the finer points I am attempting to express in this blog post. Download it to hear our discussion and subscribe to hear more sci-fi goodness. Unfortunately the show has stopped airing new episodes.

If you are interested in more rantings about Star Trek or any Science Fiction for that matter, check out my weekly podcast The Dr. Sci-Fi Show. Subscribe in iTunes, or visit my website at drscifi.com.

Thank you for joining me down memory lane.

One Response to A Starting Point For Star Trek: The Next Generation

This site uses Akismet to reduce spam. Learn how your comment data is processed.